A lot of the material written about Anna Wise has been largely focused on her involvement with Kendrick Lamar and his most recent albums Good kid, m.A.A.d city, Grammy-winning To Pimp A Butterfly, and Untitled Unmastered. Her sweet ‘n sour vocal contributions to these albums and the creative process that lead to their success is often mentioned*, but today, we will discuss the woman behind the voice and the voice that gave birth to The Feminine: Act II and its slightly older sister, Act I.

Years before collaborating with Kendrick Lamar, Anna Wise and Dane Orr (both Berklee-trained musicians) combined forces to create the dynamic duo, Sonnymoon. Their three albums– two of them self-released– feature a melange of distorted vocals, otherworldly sound effects, intriguing lyrics, layer upon layer of loops, and entrancing synth beats that make their music difficult to categorize but easy to lose yourself in. Their sound can be described as an experimental approach to pop music if you consider the manipulated variables of the experiment as different combinations of sonic effects or different iterations of pop sprinkled with jazz or hip-hop or some funny fungus. Naturally, there are traces of Sonnymoon throughout The Feminine, but during an interview with NYLON Wise confessed this project was meant to be “more simple musically and less vague lyrically.” In fact, she purposefully named the album The Feminine so there would be no confusion regarding what it was about.

Act I of The Feminine introduces listeners to five distinctly feminine roles (four of which have accompanying music videos) that are expanded upon in Act II. In order of appearance there is the perspective of the bride, the slut, the business b**ch, the witch, and the nun. Although the album as a whole is chock-full of feminist anthems, the one raising the most eyebrows has been “BitchSlut”, a song inspired by one of Wise’s earliest memories of being catcalled. The lyrics “I know what kind you are/ if I say no I’m a b**ch/ if I say yes, I’m a slut” are tremendously empowering because they return control to women and help validate the complexity of feminine realities. For example, the bride in “Precious Possession” demonstrates that how people perceive and navigate sexuality is largely due to years of programming and says “we’ve learned that this is what you want/ we can’t erase what we’ve been taught.”

In addition to “Decrease My Waist, Increase My Wage” and “Boss Bitch”, “Stacking That Paper” draws attention to the blatant gender inequality that plagues society– specifically in the work place. When she explains “a girl has got to try twice as hard for half as much and still you hate her/ that’s why I’m stacking that paper” a bright light continues to shine on the unreasonable standards that have persisted for ages. Other tracks like “Go” (featuring bassist Christian McBride) and the funky “Some Mistakes” (produced by mndsgn) focus more on self-love and encourage women to consider if and what they are willing to sacrifice in exchange for their desires. Wise’s storytelling skills seduce the ear when the frenzied “Self On Fire” dramatically draws the album to it’s peak that continues through the smoldering phoenix ashes “On The Highway” and elevates us to a peaceful place where there is “Balance In All.”

Songs like “Balance In All” and “Coconuts” reflect Wise’s acute awareness of the world around her and her unwavering devotion to spreading love and promoting equality through her music. In an interview with NPR she says, “This is an important time for all women to feel proud and happy to be ourselves, exactly as we are, to love ourselves and truly listen to and love others. I hope this project is a testament to the strength and the power that women have when we work together.” The feeling of being celebrated and accepted for our differences on this beautifully interconnected planet is something that many people crave– especially at a time when so many are isolated and cast out of their communities. Anna Wise attracts listeners not only with her unique voice (and mesmerizing mermaid curves) but also with the bewitching energy she carries with her on and off the stage. 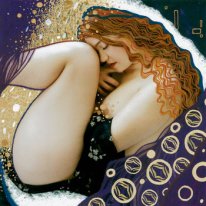 Act I. Recognize the Klimt reference?

Drove down to Austin to see Anna Wise/Sonnymoon last summer. It was the best day. 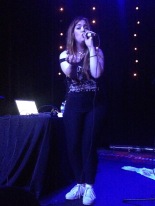 *For more on how Wise and Lamar connected and how they used their time in the studio, I direct you here. For links to other interviews and resources I enjoyed while writing see here, here, and here.

View all posts by babriellegyrd